JoannaSacred Cow
Does anyone know what the date was that Neil performed for "Sessions at West 54th"?

Neil was supposed to play in Edmonton and Calgary (Alberta, Canada) in August 1998, and had to cancel about a month before. It was my understanding that he cancelled in order to film some sort of TV special.

Could this possibly be West 54th? If not, does anyone have an idea what the TV special was that was filmed in August 1998?

Can anyone confirm that 5th December 1998 was in fact the date this show was recorded?

Unable to help with precise date, but I have the official DVD release in pristine condition for sale if anyone is interested. PMs for more info welcome.

All good, I have a copy, thanks.

Interestingly, this DVD was not released until 19th December 2000, not long before One Nil came out.

According to Wikipedia, the concert was recorded in 1999, but almost twenty years ago, a poster in this thread reported 5th December 1998.

I'm surprised the exact date is not mentioned on the DVD description (I don't have the DVD, but I would have thought it would mention it somewhere in the fine print.)

I would suggest 1998 because that would fit in the timeline when Mark Hart was playing a few gigs with Neil at the time.

almost twenty years ago, a poster in this thread reported 5th December 1998.

That was me and now I feel really old

I'm struggling to remember my source for the exact date, but there is a video of Faster Than Light from Sessions At West 54th on neilfinn.com and the date says 1998 so I would tend to rely on that more than Wikipedia's 1999 claim.

Hi all.  I was at the taping of that show.  It was wonderful.   My memory is that is was a warm evening in New York, which, my memory says it was likely in August when it was taped.  I was sitting on the right side of the stage abut 3 rows back.  Very intimate setting.  Great sound.   The room was rather quiet but Neil's version of DDIO, with the added Everly Brother's song Dream was spellbinding.

I compiled an extensive timeline of the Try Whistling This tour back in the day and attended quite a few shows - the Sessions taping certainly occurred in 1998, most likely in August as Vinzo801 pointed out. The tour played in New York twice - August 22nd at Irving Plaza in Manhattan, and August 24th in Westhampton. There was no performance on the 23rd so it's possible that was the recording date, similarly the 21st. The final show on the North American leg of the tour was a free performance in Boston on 29th August which brought the tour back to the North East but I would guess the Sessions set was taped on a day off while the band were in New York - so very likely August 21st or 23rd. Can anyone confirm?

Setlist.fm has the New York City and Westhampton shows as 22 and 23 July... I’m responsible for those entries and my source was Frenz.com/neilfinn

August 22nd and 24th according to MTV and other tour listings at the time; 22nd and 24th on various bootleg recordings of the shows too.

Any New Yorkers have ticket stubs for this pair of TWT tour shows?

OK finally have access to my resources - you're correct Guy, Irving Plaza was 22nd July 1998; but I'm still seeing the Galaxy in Westhampton listed as 24th July 1998, a date the bootleg agrees with.

The majority of the TWT North American tour dates were in August, the New York shows were in July and getting back to the original "Sessions" question - it was most likely recorded during a day off while the tour was in NY the 4th week of July 1998. Phew.

Love that between us, we have pretty much figured this one out! Even the fact we got down to the exact month (July) is impressive enough for a show whose performance date was basically unknown, even among fans, for years.

Neil played another "professionally recorded" performance on July 7, just a couple of weeks earlier, for the ABC (Australia) TV show, Recovery, which was simulcast on Triple J radio as Live at the Wireless show. The 11 tracks he played (at least that were broadcast) were all played at the Sessions at West 54th show.

Also, the date is still listed as December 5th on setlist fm. What should we do there?

It appears that the Recovery special was recorded in the second half of June 1998 (exact date unknown) early in the initial promotion tour for Try Whistling This before the tour kicked off after a round of TV and radio appearances throughout Europe - the last confirmed date of which I have is 15th June on the Richard Allinson show on BBC Radio 2, so the earliest viable recording date is a couple of days later. The tour began in New Zealand in late June so it's possible the Recovery special was recorded in June and timed to air on 7th July in the middle of the Australian tour (assuming the date of 7th July is accurate) - It's unclear if it aired June or July but it's posted on YouTube with a June date and there were several other promotional appearances in Australia in June.

Regarding the December 5th date: the Try Whistling This tour ended from December 9th to 12th with two shows in Sydney and one in Melbourne which was broadcast on TV. They followed an appearance on "Live At The Wireless" on Triple J but I have a date of December 9th with only two songs performed.
"Live At The Wireless" broadcasts have typically been more substantial. There's also a possibility the Recovery special was rebroadcast partially or fully to coincide with the December shows? If any Australian fans have a more accurate insight, please chime in.

For what it’s worth I track my spending and just checked my spreadsheet for 1998 and it indeed was July 22. $30 - seems so cheap! Neil was sold out which surprised me so I had to buy it off the street.  Maybe face value was even cheaper.

This gig was released by the club. Can’t confirm this but my memory is that someone working there had been rude to Sharon before the gig and that’s why Neil did an impromptu version of I Love You Dawn just before (?) You’re Not The Girl You Think You Are.  The crowd singing Fall At Your Feet was really magical - I’m hit and miss on the audience interaction thing but it was heavenly that night. Sadly, the onstage mics didn’t do it justice on the club cd. Still great to have the memory though. Great venue too.

And Neil wore the same shirt that he did on the Sessions dvd. I think that was his “tour outfit” so not especially surprising.

You're right! I'm glad you picked me up on this. I've just updated my own data. According to Setlist FM, the Recovery/Live at the Wireless special was recorded on 1998-06-30, so I guess that's what I'll go with. Thanks for all that other info you provided too.

And yes, I assume the December

Regarding the December 5th date

Yeah, I guess Recovery/Live at the Wireless was either a re-broadcast or original broadcast, but just recorded five and a half months earlier.

And the only Richard Allinson Show performance I have is the 2001-05-05 One Nil show. It's 7 tracks and runs almost half an hour. Audio is not the best, but still quite good.

For what it’s worth I track my spending and just checked my spreadsheet for 1998 and it indeed was July 22.

Glad to have that confirmed, thanks. I actually put together my own personal concept cover art for the show a while back, compiled from the nine songs originally released across the two live FOTE compilations in September 1999.

Here you go, I called it Nine from the Irving Plaza. If anyone has ripped the audio from their fanclub CDs to FLAC/MP3 files, you're welcome to create yourself a new album from those tracks and tag this as its cover art.

Would love to hear a full version one day, or anything similar from this era. But hey, we're pretty spoiled with what is already available! 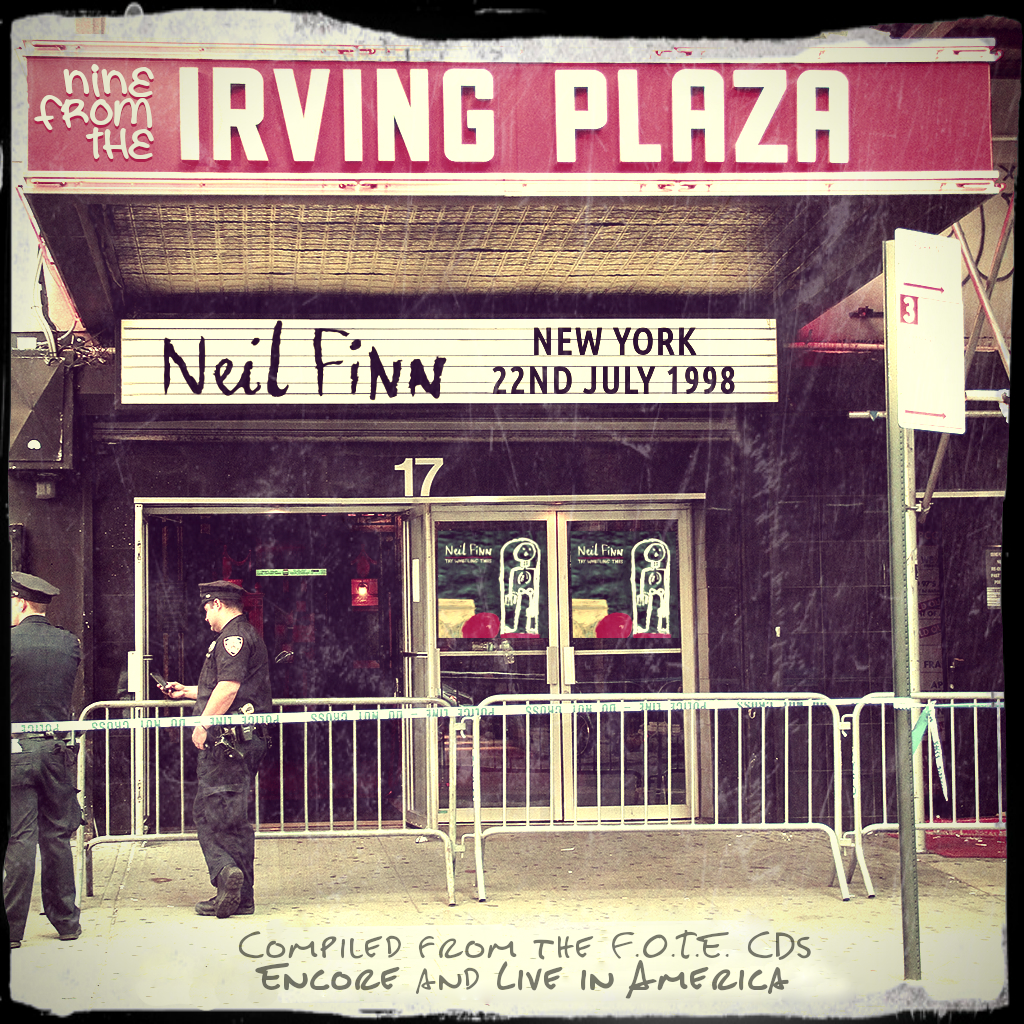 Awesome.  The club did release the entire show (or something close) from Irving Plaza.  17 tracks:

Last One Standing / King Tide / I Love You Dawn/ Not The Girl / Dream Date / Tokyo / Faster Than Light / Fall At Your Feet / Distant Sun / Try Whistling This / Sinner / Souvenir / She Will Have Her Way / Don't Dream It's Over / Four Seasons / Truth / I Got You.  So, pretty much what is on the Sessions at West 54th.

It was a really good gig as I recall.  Neil in fine voice.  Good band.  Great set list.  Well received.  The only minor negative thing I clearly remember is that the crowd was noticeably less into it on the solo numbers. Still enjoyed it, but you could tell it wasn't the same delight as with the other songs.  Maybe because the album was still new at that point - out for barely a month I think.

Neil made some reference to having played at Irving Plaza with Split Enz years ago - and then pointed to some young folks in the crowd and said, "probably before you were born."

I was touch and go on going to that gig and only decided at the last minute to check it out after work.  Was really pleased that I did.

Also performed that night: Suffer Never, Loose Tongue, Twisty Bass, Addicted and a flirtation with Smoke On The Water.