Is the anticipation killing anyone else? I feel like I've been waiting for these deluxe versions with bonus tracks for 15 years! Part of me is a little scared that I'll get some mysterious disease or die in a car accident before they're released and never get to hear them. Just for fun I thought I would put together a series of Bingo cards based on what rarities could potentially show up on the upcoming releases. These are tracks mentioned in Something So Strong, played live, or alluded to in some other way but never officially released (with the exception of "Anthem", which was vinyl only and "Spirit of the Stairs" which appears in an edited version on the Farewell to the World bonus DVD).

Here's how you play

1. Pick one of the ten bingo cards below and post your choice on this thread. It's fine if multiple people choose the same card, we'll just have multiple winners. If it really becomes necessary I can make more cards =)

2. When the track listing for the bonus CDs is released, review your Bingo card and see what you get. We'll take horizontal, vertical, diagonal, or four corners. Mrs. Hairy Legs is a free space that everybody gets.

There is absolutely a chance that not enough of this material will be included in the bonus discs and that I will have just wasted my time. Or Jaffaman could drop by and tell me that none of these cards will be winners, but where's the fun in that?

I will start things off by choosing card #7. 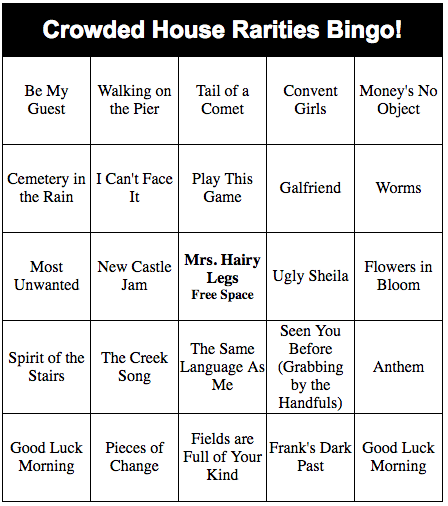 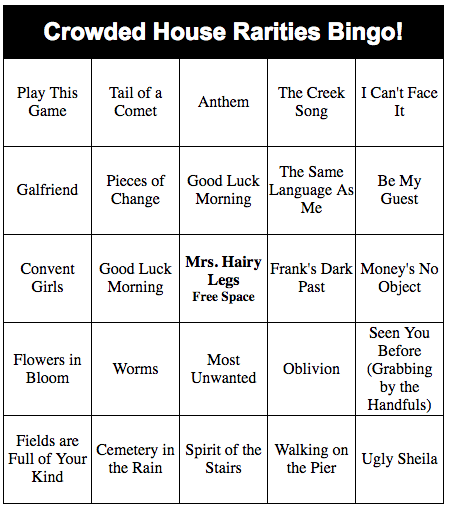 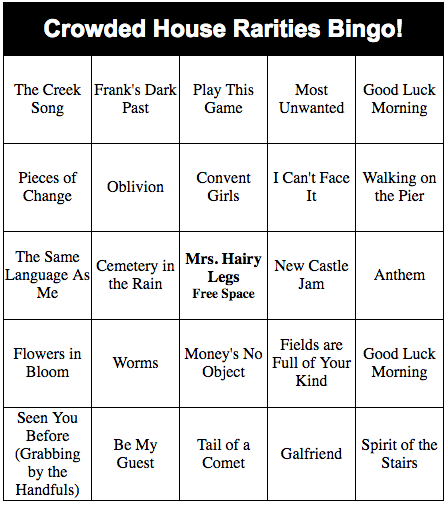 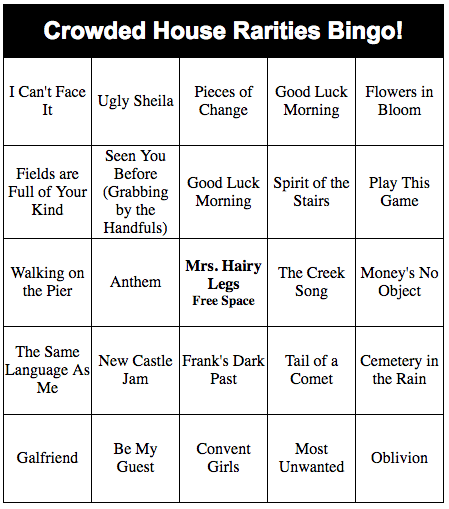 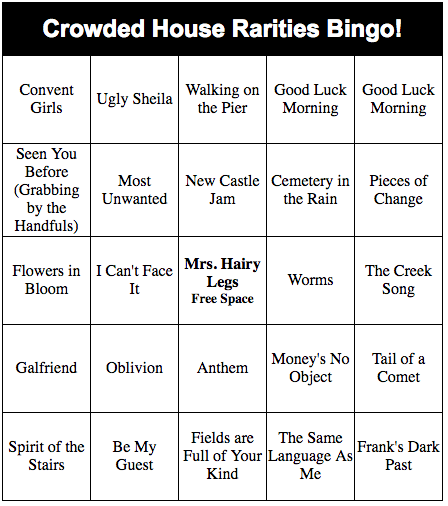 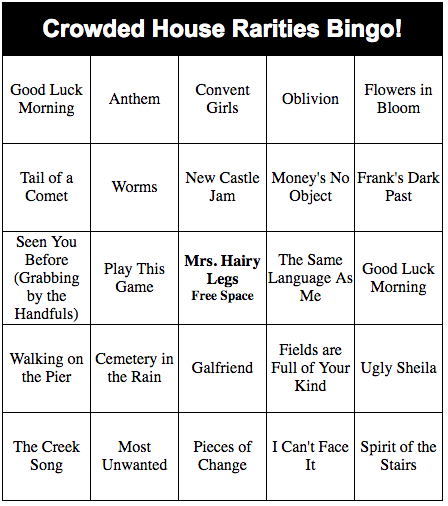 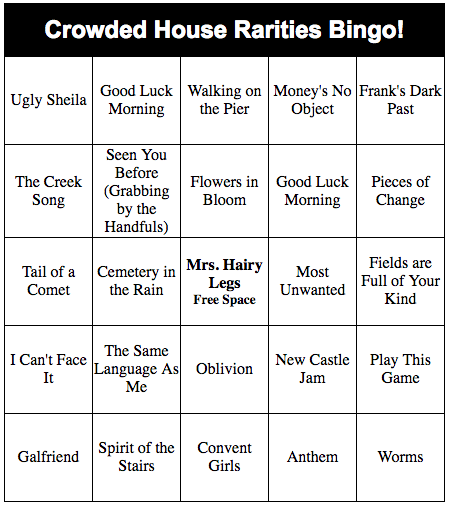 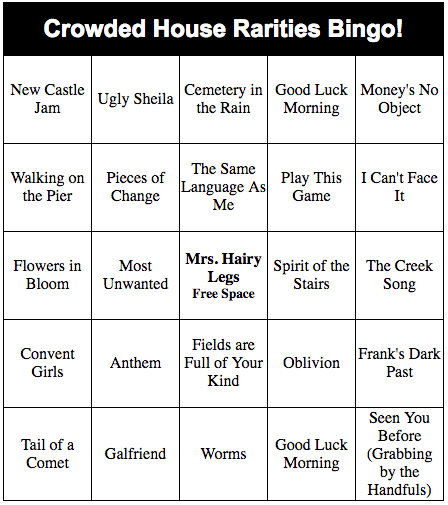 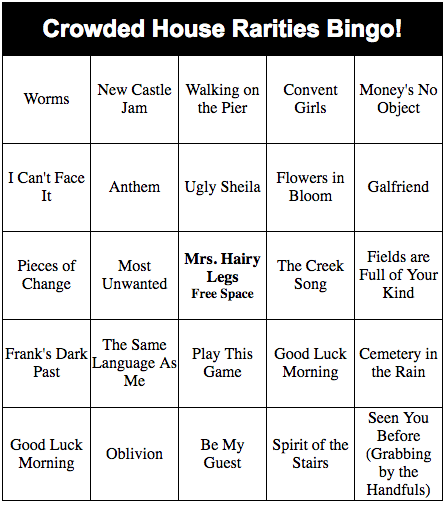 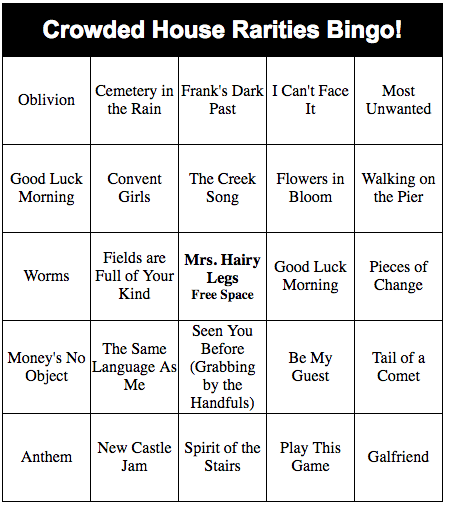 Of course, I feel like a winner getting ANY rarities! I'm really pumped for this, though I would still prefer the box set and not have to buy every album again, but I did it with all 10 Alan Parsons Project releases, so whatever it takes to get bonus tracks, I'm in.

I'll take #3. Based on titles alone, I've always been curious about Cemetery in the Rain and Fields are Full Of Your Kind.

My impression from gryphon and jaffaman's comments, is we are getting several extra discs' worth of bonus...so I would hope all or most of these tracks are included, plus a lot more.

On the other hand, I thought I've read that some songs like Be My Guest, Convent Girls, Same Language and others were only ever performed live. I wonder if live tracks like that are part of the mix of things, since they've never been "officially" released to the public, just on bootlegs and fanclub discs. Will still be nice to get an official version (perhaps cleaned up or remastered) but I hope not too much space is taken up by stuff like that which, while not yet officially released, many of us are already very familiar with.

I'll take 8.  Great idea, Painaporo.  I've been right there with ya on this for the past 15 years (or however long it's been).  And I have reason to believe we're going to get a studio version of "Convent Girls".  Sure do love that chorus.

I will take #2, been desperate to hear "Fields are full of our kind" for years, particularly since the original woodface tracklist appeared in the Something So Strong book and being a saddo  wanting to make that CD !!!

BTW maybe PG can announce one album at a time to allow us the excitement of crossing them off. No ???? OK PG let's have em all (PS mid August has been and gone

I'll take 5....this is brilliant Painaporo....thanks for the the idea!

I'd take #9 because it's my birthday number but as that's gone, I'll take top of the shop #1

No one took two yet? Looks great for me!

Neat idea by the way.

Too bad I missed out on this thread, but glad to be back on the Frenz Forum!

Does this mean theres loads more to come or am I not good at looking through lists!!!

Either way really pleased with the Bonus tracks announced, many I've never even heard whispers of.

"Play This Game" is actually "Burnt Out Tree". At least, that's what it was called on the original demo cassette. It's on the discs twice as a demo and live track.

"Galfriend" is probably "Does Anyone Here Understand My Galfriend" which is on the debut album's bonus disc.

"Money's No Object" is included in "The Burglar Song" live medley.

"Flowers In Bloom" is there, but you'll have to find it yourselves

Thanks Jaffaman and I call column, Intrigued by your last comment on Flowers In Bloom, does this mean there might be more hidden gems?

Hi Jaffaman: Just for completist sake, I'm curious about "Good Luck Morning".  Wasn't this slated at one point for Woodface (I'm assuming therefore was studio track mixed for release)?  If so, was it just considered inferior?   If it's not out now I would assume it will never come out.  Thanks, it sounds like such a happy song but maybe it's a bad, happy song.

LOL.  Great stuff to look forward to in November!!

Since Jaffaman says that Play This Game is really Burnt Out Tree, then I think have Bingo!

Bottom row across of Card #10.  I do have a photo, but can't figure out how to post it here since I dropped the image hosting service I used to use and can't seem to do it using Photobucket.

Since Jaffaman says that Play This Game is really Burnt Out Tree, then I think have Bingo!

Bottom row across of Card #10.  I do have a photo, but can't figure out how to post it here since I dropped the image hosting service I used to use and can't seem to do it using Photobucket.

Haha! Yes, we have a winner! Congratulations!

Rarities Bingo results are in! Looks like cards 1, 3, 5 and 10 are our winners. That's counting "Burnt Out Tree" as "Play This Game" and counting "Galfriend" as "Does Anyone Here Understand My Girlfriend" but not counting the medley version of "Money's No Object" because it isn't a listed track. I'm also not convinced that Creek Song is what I think it is. I thought it was a Hester led song from 1985, but it's inclusion on the Woodface disc tells me I might be wrong, but that's neither here nor there when we're talking Rarities Bingo.

I apologize for anyone who chose a card with "Good Luck Morning" on it twice. Not only was that my mistake, but it also didn't appear on the deluxe versions. If it had, they would have been lucky cards.

Thanks everyone for playing! It was fun to build up the anticipation and I for one have not been disappointed. Congrats really to Jaffaman who had to create sets that would be both the diehard fans and casual fans happy. I think he did a spectacular job and I can't wait to finally hear the results!

Here are the results for each card: 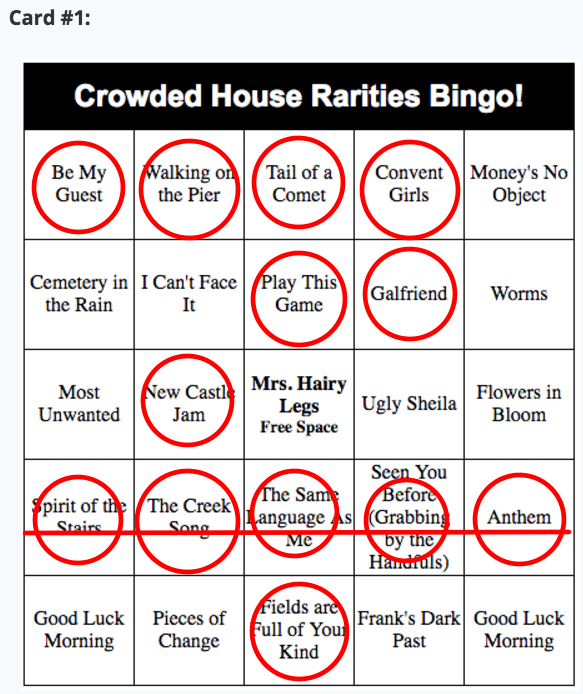 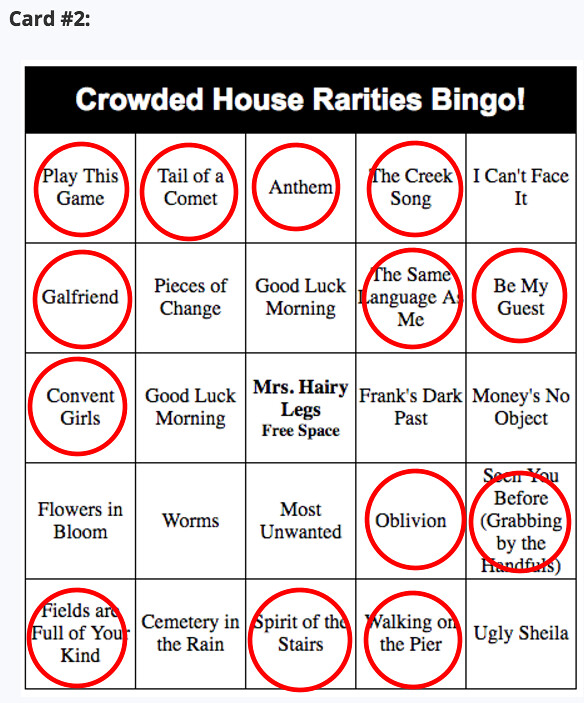 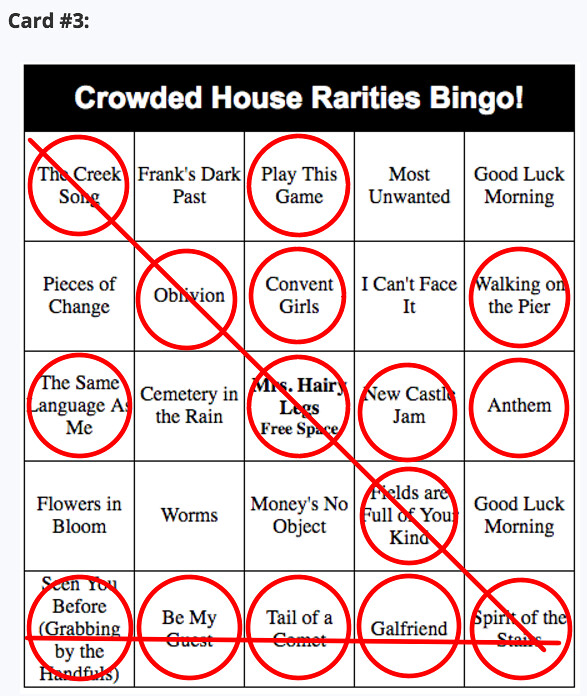 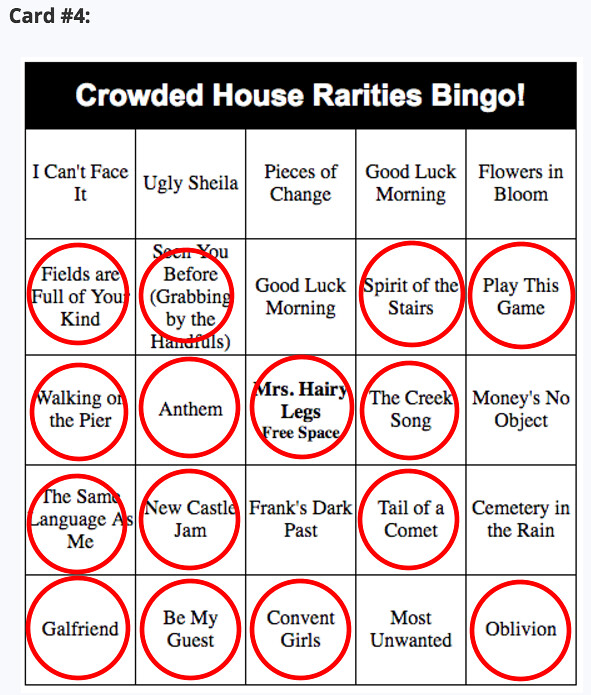 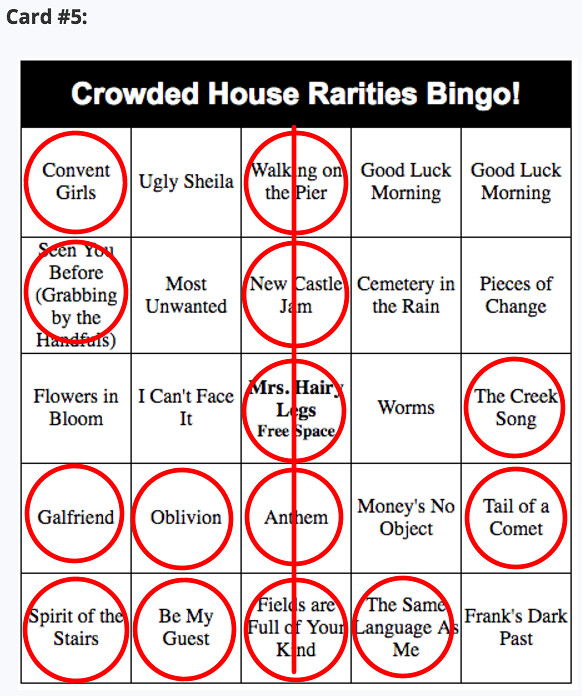 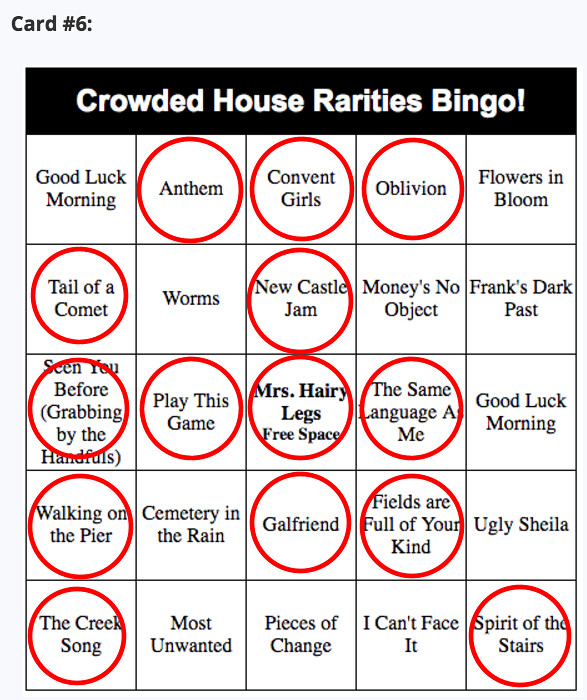 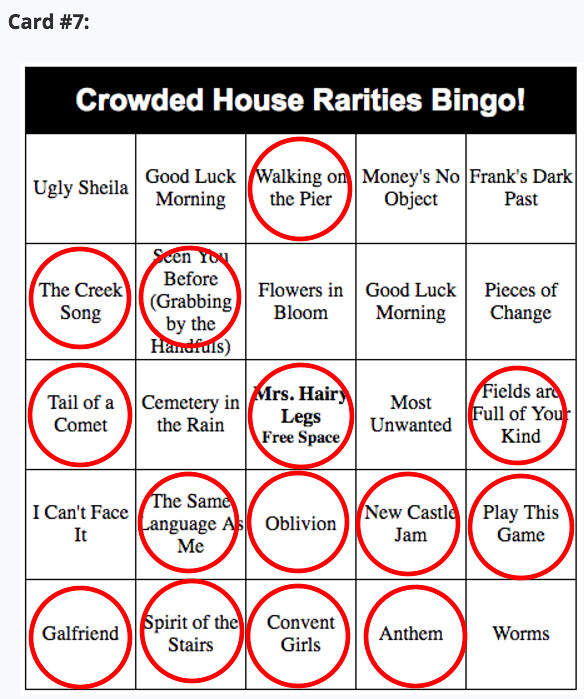 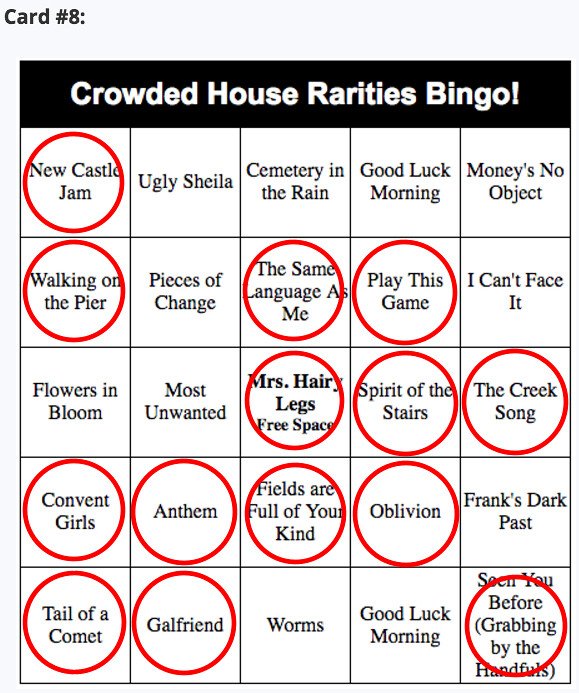 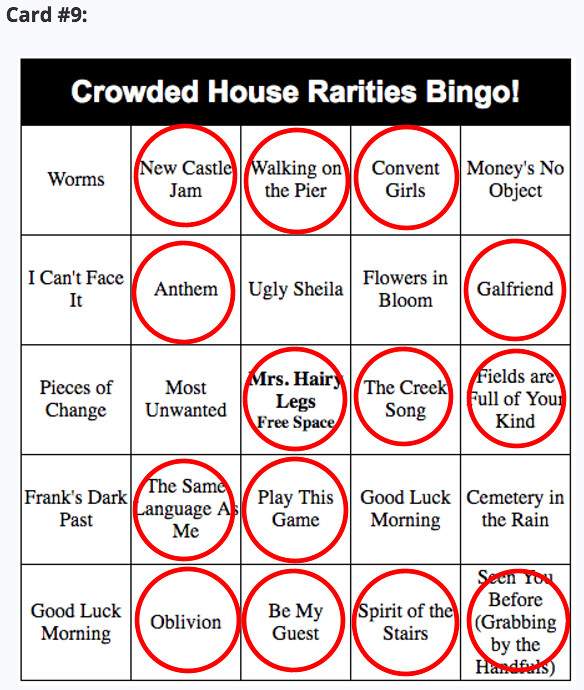 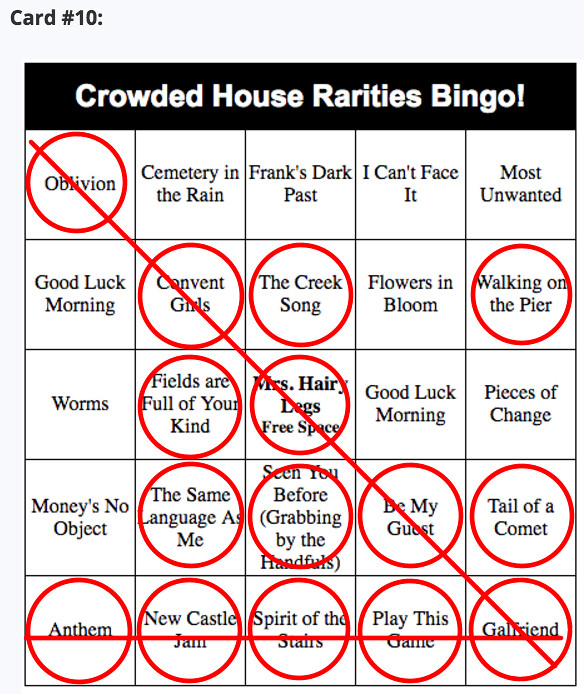 I'm also not convinced that Creek Song is what I think it is. I thought it was a Hester led song from 1985, but it's inclusion on the Woodface disc tells me I might be wrong, but that's neither here nor there when we're talking Rarities Bingo....

...Congrats really to Jaffaman who had to create sets that would be both the diehard fans and casual fans happy. I think he did a spectacular job and I can't wait to finally hear the results!

Thanks, Paināporo. I'm so pleased you're excited. I've been dying to share this stuff with you for a very long time!

"Creek Song" is the same song that The Mullanes performed in 1985. It was briefly revived during the Woodface sessions. It's also been known online as "Taking Water" and "Desert Song".